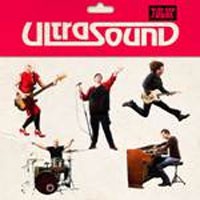 They said it would never happen. And by ‘they’ we mean the band, their friends and anyone who had ever worked with them. But somehow, against all odds and several wads, ULTRASOUND are back. Back with a fresh attitude. Back with a new keyboard player. Back with a second album a mere 13 (that’s thirteen) years after colossal debut ‘Everything Picture’ rattled the gills of the album charts. You really couldn’t make it up, but make up they have.

This much we know: as the Twentieth Century wheezed to a close Ultrasound were in the process of spectacularly imploding. 1999 might have been the first year the known world heard of the likes of Doves, Coldplay, Elbow and Muse but for Ultrasound the race was already almost run, a journey which had seen them catapulted from the obscurity of a squat in West London to the front of the NME and a megadeal with Nude Records with scarcely a pause for breath. The fallout was, in a way, as thrilling as the rise upwards. Battered by a reality they didn’t understand and bent out of shape by a music industry they no longer trusted they parted company and walked out of the party. It would be ten years before they set foot on the same stage again.

But eventually, thanks to the charitable needs of a benefit gig for Tim Smith from The Cardiacs, Ultrasound did find themselves back together in a rehearsal room in 2010. Subsequent carefully chosen live shows at the Bull & Gate, Cargo and the Borderline presented a band who were (back) at ease with themselves. And creating the mammoth sounds of last year’s comeback single ‘Welfare State’ / ‘Sovereign’ gave them a taste for the creative juices they had never lost, just gently misplaced for a decade.

The excellent news is that that lost decade has not withered their appetite for gargantuan pop hooks and outlandlishly cosmic freakouts. ‘Play For Today’ was recorded in SNAP studios in North London and produced by Guy Massey. It consists of ten songs sprawled across 53 minutes and ransacks their trademark widescreen heart-searching / art-thrusting box of prog tricks, veering from the rock’n’roll brutalism of ‘Goodbye Baby, Amen’ and the sadfaced pop hookery of ‘Deus Ex Natura’ to the frankly epic ‘Between Two Rivers’, replete with mournful colliery brass band. Every alternative National Anthem should have one. There’s even a Bassey-esque vocal turn from bassist Vanessa on ‘Glitter Box’ - a life of surprises indeed.

So now they find themselves back on fierce panda, the launch pad for their debut ‘Same Band’ single the first time around. Of course, it is sublimely, typically Ultrasound that it should be thirteen years which separate their albums. Never knowingly understated at the best of times it would somehow have been poor form if they had waited a prissy half decade like the Stone Roses before getting around to a follow-up.

So here they are now. Entertain them. And quickly – otherwise it could well be the year 2025 before we get to hear a third album…