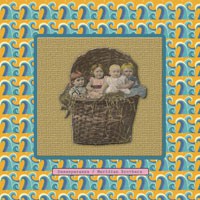 Bogota’s Meridian Brothers release their delightfully surreal and playful album ‘Deseperanza’ on Soundway Records. Traditional instruments, electronics and distorted vocals are dragged through an array of influences to create a world that is as original as it is unclassifiable.

Straddling the line between new and old, Meridian Brothers’ mischievous blend of Latin rhythms and psychedelic grooves is the creation of Eblis Álvarez, one of the key figures of the experimental music scene in Bogota, where his contemporaries label him a genius. As with all of the Meridian Brother’s releases, every instrument on ‘Deseperanza’ was played and recorded by Eblis himself.

A true avant-garde guitar player and composer he also plays in Mario Galeano’s band Frente Cumbiero and was one of the 42 musicians involved in the recording of Ondatrópica, released this summer through Soundway Records.

‘Desesperanza’ (meaning hopelessness in English) was recorded in 2012 and is dedicated exclusively to salsa and tropical music, twisting it through a dark and theatrical soundscape but never abandoning the traditional aesthetics.