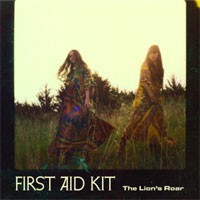 This, their second album, was recorded in Spring 2011 in Omaha, Nebraska by Mike Mogis (Bright Eyes, Jenny Lewis, Monsters Of Folk). From the dynamic title track onwards, the sophomore album is a rich and stirring affair that expands upon the keen and sophisticated country tinged pop of their critically acclaimed debut.

‘The Lion’s Roar’ is a full band record, the Girls’ Father Benkt takes the bass, Mattias Bergqvist drums, while Mogis and Nate Walcott of Bright Eyes, and a cast of Omaha-based musicians round out the sound.

Album closer ‘King Of The World’ features the Felice Brothers, just passing through town during the session, and local hero Conor Oberst, who sings the last verse.