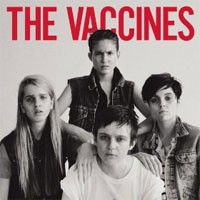 The Vaccines 'Come Of Age' follows their platinum selling, Brit nominated and NME award winning debut, 'What Did You Expect From The Vaccines?' which was released in March 2011.

The album was recorded at the ICP studios in Brussels and Distillery in Bath with producer Ethan Johns.

Ryan says: They're back and coming in strong, 'Come Of Age' is just a bit crisper than their debut, the guys seem to have perfected their sound this time round. All in all they still has the same magic that was always there.

The VaccinesCome Of Age - Deluxe Edition