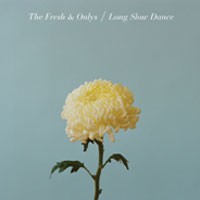 The Fresh & Onlys look exactly like a biker gang composed of record store employees who could stomp your ass while shouting Kobaïan (that language ‘70s French prog band Magma made up) at you, if they felt like it. So, it’s cool if you feel a bit unnerved when first meeting these four shaggy San Franciscans, even if that meeting only occurs via their songs.

There’s something very bad-ass about their music; it’s entirely assured and brazenly unique. You are free to think of them as part of a vibrant Bay Area scene (because they are) or try to link them to the nu-garage movement of several years ago (which is a stretch). But whichever contextual lens you use, it hardly matters. The band is so comfortable with mixing and matching seemingly disparate genre elements at this point that as a listener, it’s easy feel like a mouse batted about in a corner by a housecat.

Long Slow Dance is a mature, anthemic and—in subtle ways—pretty weird album. A lot is going on here, but it’s not in your face about it. While not their first time in a “real” studio, it’s instantly clear that their time spent at Phil Manley’s Lucky Cat Studios was the most fun and focused recording environment the group’s been in. The tunes were captured on the same 16-track two-inch reel-to-reel that Warren Zevon recorded “Werewolves of London. They slyly propel the record beyond what you thought it might be about, or was going to be on first listen (perhaps another tasteful and kind of weird rock record which mixes and matches cool stuff from obscure record collections). It is tasteful, of course, and it clearly mixes many things together. But it does this at the service of forceful songs—frequently witty and often lovely songs. That’s the real reason it’s difficult to stop playing this album once you start. And there you have it—the Fresh and Onlys, here to mess with your head and have you say “Thank you.”

“…swoonily melodic. I would not complain about a whole album like this.” - “Yes or No” track feature Stereogum

Bonus Disc
1. Take Back The Night
2. Heel Toe
3. Do What I Came To Do
4. Long Slow Dance (Alternate Version)