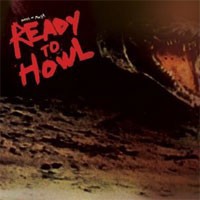 Agitated is super chuffed to be handling the CD reissue of this monster... Over the past few months and years, dropouts all over the world have been nodding out to the amped up riffing of PURLING HISS & the economical chuga- lug zen of SPACIN'. But only the most committed seekers have been privy to the roaring big bang that started it all: BIRDS OF MAYA.

They're a locked-in dynamo that gets real, real gone at the strike of the first note that needs to be seen to be believed. But as the Birds rarely (very, very rarely) perform outside of their North Philadelphia neighborhood, Ready To Howl will have to suffice. Formed in 2002, BIRDS OF MAYA is the finest meat n' potatoes neanderthal rock group operating in the world today, and they're undoubtedly the outfit most committed to creating throbbing, thoroughly relentless, blues-based hard rock.

On Ready To Howl, astute listeners will note nods to the fried power-rock of Split-era Groundhogs or the relentless garage mayhem of High Rise recorded under claustrophobic sub-Funhouse decadence. Anyone with ears will hear fried-Hendrixisms all over this thing. It was the most ambitious TestosterTunes release to date: a 3-song, double-LP by the three men of Philadelphia's BIRDS OF MAYA. Called Ready To Howl and it's the soundtrack to an upcoming feature length film of the same name. Ready To Howl, the film, deals with one dude's struggles in-and outside of polite society.

According to the producer, "the order of events is something like... getting off of work, partying, a parking lot bottle fight with a marine, driving drunk, the purchase of a deadly snake for purposes of revenge, hitchhiking, off road driving, car accident, the folly of vindictiveness, and finally a physical and metaphorical ascent to the highest point of the mountain." The soundtrack follows the same line, with album sides tracking Friday, Saturday, and Sunday.

The CD version features the 3 tracks of the 2LP in unedited for vinyl length, no splits in the songs for you to get up and turn the record over...turn it UP!!!