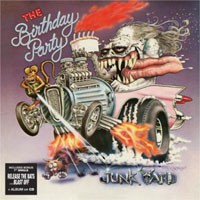 4AD reissue ‘Junkyard’ in a special vinyl edition. Apart from the LP, the package also contains a bonus 7” featuring ‘Release The Bats’ and ‘Blast Off’. Additionally, it includes a CD of all 12 tracks, so that fans can also access the music digitally.

The album has been mastered from Henry Rollins’ 2000 re-master, previously unavailable in Europe, while the single is a new, 2012 master taken from the original studio analogue tapes.

“Released in May 1982, ‘Junkyard’s uncompromising contents signalled both the oncoming demise of the band responsible for them and rock & roll’s logical conclusion. Harnessing the power of The Stooges’ ‘Funhouse’ with the limitless possibilities offered by Captain Beefheart’s ‘Trout Mask Replica’, The Birthday Party were a product of the uncertain times that created them - the unwitting soundtrack to a time of death, darkness and decay.”

“Troubled music for a troubled age, Nick Cave’s world was created in a white-hot blast of visceral energy, gut-wrenching violence and Dadaist stupidity while the work of his band mates fleshed out the vision to devastating effect. Here, blasphemous imagery fraternised with scenes of murder, brutality and sadism as it rolled and revelled in a trash aesthetic that belied the intellect behind it. The noise created by the band was at once familiar - a wild mutation of rock’s primordial slime mixed with a nightmarish interpretation of Elmer Bernstein and a skewed vision of the blues spewed out rather than played - yet startlingly new and all underlined by an inevitable finality.”

“With the passing of 30 years, ‘Junkyard’ still sounds as if it’s waiting for rock music to catch up with it. Throwing down a taunting gauntlet to subsequent generations of musicians, this feral collection of songs simultaneously closes a door on something that can’t be repeated or improved upon. The distance of time has failed to reduce its sonic power and revisiting Junkyard three decades after its birth is to rediscover an album more melodic if no less manic as was initially perceived.” - Julian Marszalek, The Quietus