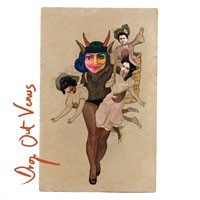 Drop Out Venus reside in Deptford, South East London, where they write and record music in their one-bedroom flat. Originally hailing from Bulgaria, Iva Moskovich, Chris Moskovich and Ursula Russell formed the band after discovering they all share a form of synaesthesia, which has led to a wildly sensual approach to playing music, their musical education being most deeply felt somewhere between the whisky drenched piano of Thelonious Monk and the crazy hazy kisses of the Flat Duo Jets.

They are best experienced live – the last six months has seen them bring their intense and sometimes chaotic act to several venues across London and the South East, including the Roundhouse, Great Escape and Somerset House. Their shows incorporate the raw energy of New York in the late 70s and the honesty of the sawdust strewn floors of jazz era bars, all channeled through an eastern European ruggedness and mysticism.

Their first single, the double A side ‘Elastic Teen Rent/I Kill Foxes’ released September 24th on Dirty Bingo Records, follows a prolific six months for the band, with their first track 'Love In Vein' capturing many ears online and on radio (Zane Lowe/John Kennedy/Mary Anne-Hobbs), and a self-released cassette packing a medley of over thirty tracks within thirty minutes. Recent support slots with the likes of Charlotte Gainsbourg and Connan Moccasin prove that they are ready to take their unpredictable ‘Junk Jazz’ to much bigger stages and audiences