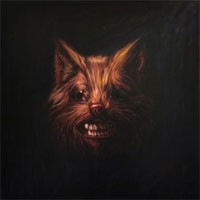 DVD IS ONE HOUR 40 MINUTES: TRAILER BELOW:


"The Seer took 30 years to make. It’s the culmination of every previous Swans album as well as any other music I’ve ever made, been involved in, or imagined. But it’s unfinished, like the songs themselves. It’s one frame in a reel. The frames blur, blend and will eventually fade.

The songs began on an acoustic guitar, then were fleshed out with (invaluable) help from my friends, then were further tortured and seduced in rehearsals, live, and in the studio, and now they await further cannibalism and force-feeding as we prepare to perform some of them live, at which point they’ll mutate further, endlessly, or perhaps be discarded for a while.

Despite what you might have heard or presumed, my quest is to spread light and joy through the world. My friends in Swans are all stellar men. Without them I’m a kitten, an infant. Our goal is the same: ecstasy!" - Michael Gira.

DVD DESCRIPTION: The Swans Seer DVD was recorded variously in the cities of Melbourne, Australia, Berlin, Germany, Brooklyn, NY, San Francisco, CA., LA, CA., and Torrance, California. The footage was filmed throughout the swans tour(s) of 2010/2011. The DVD captures swans at the peak of their creative/destructive potential. The film is a work in progress, and will ultimately result in a feature film / filmography of Swans.

“For the last two years, one of the world’s most bellicose bands has paid respect to its legacy largely by leaving it alone and tried to expand it by testing its old limits … this is exactly the kind of forward-pointing roadmark Swans deserve.” —Pitchfork

“The Swans are currently the greatest rock band on the planet....” —The Quietus

“[Gira] is looking for beauty, pure and simple, unfettered by meaning or standard songwriting notions of emotional resonance.” —The Wire

Darryl says: The mighty Swans return with 'The Seer'. From ribcage crushing noise to gentle acoustic passages, this has all the hallmarks of the classic Swans "sound"; intense, powerful and pure.