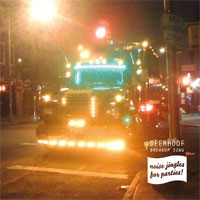 Hell if we know. Pitchfork went so far as to label Deerhoof as "the best band in the world." The New York Times described them as "one of the most original rock bands to have come along in the last decade." From their humble beginnings as an obscure San Francisco noise act, they've become one of indie music's most influential bands with their ecstatic and unruly take on pop.

Deerhoof has released 11 self-produced albums and continues to tour the world frequently.

"Deerhoof drummer Greg here to introduce you to our latest record: We've been called a lot of things, as you know. But pop has always marked the spot on the Deerhoof treasure map.
Pop = catchy
Pop = new
Pop = no rules
If you want to come dance or sing karaoke with Deerhoof, you don't have to ask twice.

We've just finished this sensational slice of Cuban-flavored party-noise-energy music. We called it Breakup Song. Just don't expect a bunch of Grammy¨-baiting sob stories, OK? In Deerhoof's thesaurus, freedom's just another word for feeling good again and raising hell and getting away with it. Stick with us and the bad guys with guns will never catch up..."