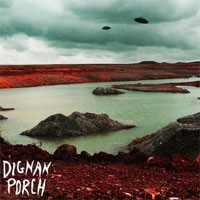 Optimism is infectious, and there can be few more optimistic statements than the title of the new album from Dignan Porch: Nothing Bad Will Ever Happen. As you listen to the warm-hearted, weirdo pop within, as you’re drawn into their world, you might be inclined to agree with them. Nothing Bad Will Ever Happen is Dignan Porch’s second album, though in many ways it’s their first. 2010’s debut, Tendrils, was written and recorded as a solo concern by singer Joe Walsh. Here, he’s joined by the full band, comprising brother Sam Walsh plus close friends Ben Goodwin, Hayley Akins and Stephen Keane. Recorded at Homerton’s Sound Savers studio with Henry Withers (Lovvers / Sharm El Shakes) Mark Jasper (Bastard Sword) and Alex Clegg (Breathe Out), The album was taped live on reel-to-reel tape with minimal overdubs.

The resulting album is a thing of raw beauty, its melancholy melodies shining through the fuzz and filth, singers Joe and Hayley crushing you with emotion throughout. “Each song,” says Joe, “is a little snapshot of whatever feelings and thoughts were happening at the time. Often I’ll start a song and it’ll begin with some sad stuff about an ex-girlfriend or something and then by the end I’m writing about time travel. I connect all the parts and make it flow. I think it’s a short attention span thing, don’t focus too long on one subject.”

Based in Tooting, South London, Dignan Porch began with Joe recording what he describes as “weird fuzzy pop songs” on a basic Tascam 8-track recorder, a collage of ideas and layered melodies that touched on noise-pop, psychedelic garage rock and melancholic folk. “The name ‘Dignan Porch’ doesn’t mean anything,” says Joe (in case you were wondering). “It’s just a combination of two words that at the time of creation, seemed to capture the vibe of the band.” Quaint as it seems now, the music was discovered on MySpace by Brooklyn’s tastemaking Captured Tracks label, who released Tendrils in 2010. Dignan Porch are not just the only UK band to be signed to Captured Tracks, they’re also the only band in the stable to release a second album on the same. Band and label both share a distinctly DIY ethos: keyboard player/singer Hayley supplies the artwork for Nothing Bad Will Ever Happen, and they all work together to create their own music videos, screen print their own T-shirts, and book their own tours. “We do everything apart from release the records,” says Joe. With Captured Tracks behind them, that’s a pretty good way to be.