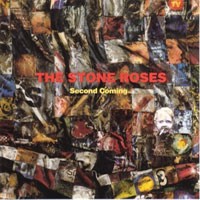 The title is a joking reference to the messianic anticipation that built up in the years between the Manchester, England rock band's 1989 debut - which Britain's New Musical Express magazine ranked as the greatest album of the 80s - and this 1995 follow-up. It's also a description of the Stone Roses' sound, a sort of second coming of 60s and 70s blues-rock, re-born with a funk beat. Back in '89 it sounded like a revolution, and it was: crossing Led Zeppelin and Bob Dylan with club music, it helped set the template for all British alternative rock to follow, from Blur to the revamped U2.

"Second Coming" consolidates that sound with a see-sawing mix of hard-rock driving songs, with chunky electric guitar riffs and big beats, and acoustic anthems that immediately sound like they've been on the radio for a dozen years or more. The latter group includes "Ten Storey Love Song", a devotional ballad with a Dylan-esque melody, and "Your Star Will Shine", a psychedelic folk ditty that would have fit on an early Bee Gees album. "Good Times" is one of the big-beat numbers, and although it starts out sounding like a very blue Eric Burdon, it builds into a classic shouted-out blues-rock chorus, the kind on which FM radio thrived in the 1970s. "Tears" follows a Zeppelin-esque arc from acoustic to electric folk. Which, no doubt, is the exact route a lot of hard-rock devotees think any second coming should follow.