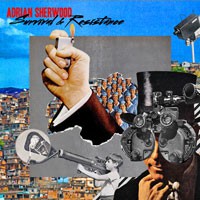 For more than three decades, Adrian Sherwood has been one of the World’s finest and most consistently groundbreaking producers, artists and remixers. He has wrought his magic upon such artists as Nine Inch Nails, The Cure, Blur, Primal Scream and Lee ‘Scratch’ Perry, as well as coining new sounds with legendary acts such as Tackhead and Mark Stewart. As label boss and producer for the legendary On-U Sound label, he has brought music to the world from New Age Steppers, African Head Charge, Gary Clail and Dub Syndicate.

Drawing on the upheaval of the all-too-recent London riots and staring down the current international economic crisis, the album is an earnest critique of current injustices, and like all great dub music is also potently enjoyable. Echoes of the UK’s hyperactive electronic underground can be heard through the album, and Sherwood’s recent time spent with such young luminaries as Kode 9, Pinch, Digital Mystikz and The Bug have no doubt played an energizing role. However, even stronger is the post-punk lineage of the On-U aesthetic and the mythical mixing approach he has evolved over the years. A swirling maelstrom of skull-shaking, heavy electronic tones and masterful deployment of breathing space and alien echo, ‘Survival & Resistance’ is the sound of avantgarde dub music in 2012.