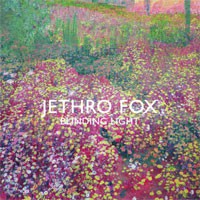 Jethro Fox is a Biblically named singer from a family of Atheists, and his celestial music is set to light up 2012. Brought up in Colchester, Essex and sharing a proud 6th Form College music teacher with Damon Albarn, Jethro moved to Liverpool to study and has since become a central character in a once again thriving music community. A multi-instrumentalist, he has played in most of the new bands in the area’s resurgent scene, which is centered on the Liverpool Institute of Performing Arts.

Now playing under his own name, Jethro’s own music is urgent and life affirming in a manner that belies the rainy gray of Liverpool. Characterized by his already-distinctive golden harmonies, and the echo of school halls and cavernous churches, his music suggests a deep affinity with the classic symphonic pop of The Beach Boys, Roy Orbison and Grizzly Bear.

A few months ago, Jethro posted his first track online, ‘Before’. Received to great acclaim (“One of the most exciting musicians on the planet”, John Kennedy, XFM”), Jethro was subsequently invited to record a Steve Lamacq Maida Vale Session for 6 Music: an almost unprecedented opportunity for an artist yet to release a record.

That’s all set to change with the release of his debut single, ‘Blinding Light’, through Tough Love Records (Weird Dreams, Girls Names). Backed by ‘Lonely Sound’, it’s the perfect introduction into Jethro’s immaculately conceived world. "A staggering set of vocal chords...there’s not a great deal of ground that it fails to cover." This is Fake DIY. “Hotter than the surface of the sun…One of the most exciting musicians on the planet.” John Kennedy, XFM.