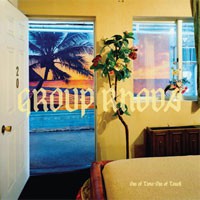 Group Rhoda is a solo project based in San Francisco. The fruits of a five year journey into self-discipline and personal discovery, Mara Barenbaum's Group Rhoda uses stark musical practices and analogue electronics to evoke imagery and rhythms both atavistic and futuristic. Using the tools of musical simplification - synthesisers, analogue effects and drum machines - Group Rhoda's aim is to build a pop music that reaches freedom through discipline. All instrumentation, whether in the studio or on stage, is played live and with no sampling; a completely organic language formed from the roots of synthesis.

'Out Of Time, Out of Touch' is Group Rhoda's debut recording. It is the culmination of a process which began with a self-taught keyboard technique and a desire to learn about the machinations of the tools of pop music and, in turn, the environment in which it is produced. While many of GR's choices are implicitly political - from a strict methodology to a strong commitment to DIY ethics and community - the outcome is also easily approachable as sublime pop music in the best sense. With a grounding in minimal wave and the post-industrial landscape, GR takes surprising detours into tropical rhythm patterns, dubbed-out bass throbs, hypnotic Wurlitzer flourishes and, above all, GR's distinctive, plaintive vocal.

The alluring contradiction at the heart of 'Out Of Time, Out Of Touch' is the push of the psychedelic, the hyper-real, the overtly physical and the pull of the artificial, the synthesised, the stark. This contradiction is brought to light continually through-out 'Out Of Time, Out Of Touch' - whether in the classic west coast psychedelic melodic sense played with Suicide's mechanical simplicity, or the industrial rhythms of Throbbing Gristle drenched in a technicolour, sun-blanched imagination. The songs on 'Out Of Time, Out Of Touch' seem to be plucked from a continuum - the throb of the bass and splashing of the drum machines are ongoing in the universe - with GR forming the songs with precision. Her voice intones themes of dislocation from reality, loneliness and the conundrum of ultimate freedom.

'Virtual Dancer' rides a bassheavy wave to comment on the fleeting nature of human contact in the modern age, while 'At The Dark' is a deep listening experience steeped in hypnotic psychedelia. 'Hi Rise' continues the theme of isolation, a reference to the eponymous JG Ballard novel, on the back of metallic tropical rhythm pattern. 'Fire' closes the album and is a pulsing, linear song which recalls 'Autobahn' era Kraftwerk, a single riff repeating and modulating around Barenbaum's freedom dilemma. 'Out Of Time, Out Of Touch' presents a surge forward in the ongoing critique and participation of pop music that is Group Rhoda.