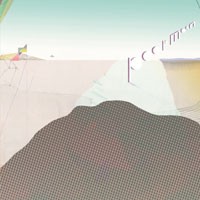 Poor Moon is a band comprised of longtime friends Christian Wargo, Casey Wescott, and brothers Ian and Peter Murray. And Poor Moon is the title of their full-length debut. But before there was a band or a record, there was the music, a series of songs forged by Christian Wargo over a period of several years. That's one of the things that makes Poor Moon sound so special: this band grew out of the songs, not vice-versa.

"I've known Christian for so long, and have loved his songwriting as long as I've known him," says Wescott. The two men previously played together in Pedro the Lion and Crystal Skulls; both are members of Fleet Foxes. For the past few years, he and the Murray brothers had been transfixed by the solo recordings Wargo periodically shared with them.

Thanks to their affinity for warm, earthy tones the music of Poor Moon can sound deceptively simple. Assorted timbres decorate these tenoriginals—marimba, harpsichord, fretless zither—but this isn't everything-but-the-kitchen-sink arranging. Whatever the instrumentation, the sense of choosing the right tool for the job always prevails. Thoughtful, impassioned vocal harmonies further reinforce the myriad musical bonds at play.

Likewise, the considered manner in which the words and music coexist, often despite seeming incongruities of mood, accounts for the distinctive character of the songs. The stretch between 2008 and the present when they were composed includes some of the most tumultuous episodes in Wargo's life. Yet Poor Moon handles even the heaviest topics, including death, addiction, and spirituality, with a certain lightness. "The way I deal with those is by drawing attention to the mystery and enjoying the whimsical aspects, but without being cute or precious about it," Wargo explains.