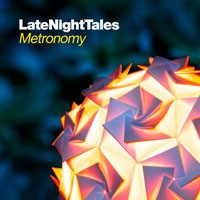 Metronomy, the effective alias of the talented Joseph Mount, have thus far released three albums, starting with the jagged electro manoeuvres of their debut ‘Pip Paine (Pay The £5000 You Owe)’, through to their two albums on Because, ‘Nights Out’, where Mount first sang, and last year’s brilliant Mercury-nominated ‘The English Riviera’. As a pop group, Metronomy that are more Four Tet than Fab Four, though with a sense of adventure that would’ve made the Fabs proud.

Their outing under the Late Night Tales banner journeys through the inspirations of the bands’ ever moving sound - along with a few surprises. Mount’s old favourite Autechre is present and correct, but then so are Kate and Anna McGarrigle and the Sun Ra of hip hop Sa-Ra Creative Partners. Joining Sa-Ra on the hip hop front, we’ve got Tweet’s ace ‘Drunk’ from her Hummingbird album alongside OutKast ‘Prototype’, spiced with some Doctor Octagon.

For pure pop, they don’t come more refined than Alan Parson’s ‘Eye In The Sky’, who is buffeted by outbreaks of unsettling weirdness, among them the sadly departed Mick Karn’s supple bass figurines on ‘Weather The Windmill’ or Tonto’s Expanding Head Band - the guys that brought the funk to synthesizers with Stevie Wonder - and ‘Cybernaut’. We also love Alessi Brothers 'Seabird' - pure 70s pop from the same album that gave us 'Oh Lori'.

And just when you think you’ve got it figured, Pete Drake arrives with his 1964 pedal steel novelty hit ‘Forever’. This is a maze rather than a journey. Naturally enough, there is the Late Night Tales special with a sparkling Metronomy rendition of Jean-Michel Jarre’s ‘Hypnose’.

We’ve always had a soft spot for Devon and her cobbled street delights, but seen through the prism of Joseph Mount, it takes on a new hue that makes Brigitte Bardot and that other, lesser, Riviera seem somehow pallid. To paraphrase Buzzcocks: another music in a different riviera.