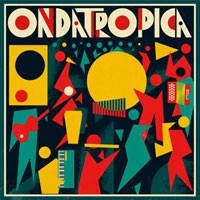 Ondatropica release their debut album through Soundway Records. The project, conceived by Colombian musician Mario Galeano, the force behind the band Frente Cumbiero, and English producer Will Holland AKA Quantic, brings together an iconic group of top Colombian musicians representing both the classic and more modern styles of la musica Colombiana. The album is released on CD and triple vinyl LP.

Ondatropica fuses traditional Colombian styles such as cumbia, gaita and champeta with boogaloo, ska, beat-box, MCs, dub and funk to create a progressive album that re-interprets the tropical musical heritage of Colombia with new approaches in composition, arrangement and production. Artists such as Fruko, Anibal Velasquez, Michi Sarmiento, Alfredito Linares and Wilson Viveros (to name but a few) joined a group of younger Colombian musicians, including members of both Mario’s band Frente Cumbeiro and Quantic’s Combo Barbaro, to (re)generate the excitement that positioned Colombian music as one of the most influential in South America.

Philippa says: Ondatropica was put together by Colombian musician Mario Galeano (Frente Cumbiero), and UK producer Will Holland (Quantic). The pair bring together an iconic group of top Colombian musicians representing both the classic and more modern styles of la musica Colombiana.