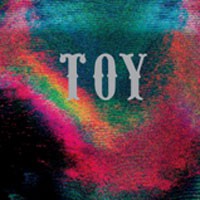 Following a couple of great singles, Toy release their much anticipated debut album, which was recorded during the spring of 2012 with Dan Carey in his South London studio.

Andy says: Right from the very start there was something special about this band. By that I mean Piccadilly sold tonnes of their first few singles, before we'd really worked out what was going on! This debut album explains the fuss; it's absolutely brilliant! Sure, they've got all the cool references which older bods will recognise in the House Of Love or even The Church i.e. moody vocals and a certain psych-tinged sense of otherness, but Toy add tasty, motorik grooves and FX-laden shoegaze swathes to a sound that is hypnotic, kaleidoscopic, but most importantly catchy as fuck! They do the arty stuff with the kosmische repetition and well-placed instrumentals, but then bring out the enormous choruses and deft pop hooks for all the kids (and milkmen!) that couldn't care less. They remind me a little bit of Ride, or today The Horrors, but I think Toy are better than both.