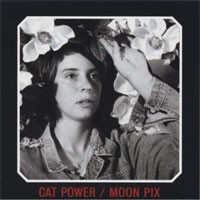 ‘Moon Pix’ is the fourth album by American singer / songwriter Cat Power (a.k.a. Chan Marshall). It was originally released in September 1998 on Matador records.

The album features Mick Turner and Jim White from Dirty Three, on guitar and drums respectively.

According to Cat Power, several songs on the album - ‘No Sense’, ‘Say’, ‘Metal Heart’, ‘You May Know Him’ and ‘Cross Bones Style’ - were written “in one deranged night” following a hallucinatory nightmare Marshall had in 1997 while alone in the South Carolina farmhouse she shared with thenboyfriend Bill Callahan. “I got woken up by someone in the field behind my house in South Carolina,” she explained, “The earth started shaking, and dark spirits were smashing up against every window of my house. I woke up and I had my kitten next to me... and I started praying to God to help me... so I just ran and got my guitar because I was trying to distract myself. I had to turn on the lights and sing to God. I got a tape recorder and recorded the next sixty minutes. And I played these long changes, into six different songs. That's where I got the record.”