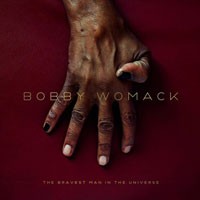 Bobby Womack is a funk and soul legend with more hits under his belt than we can count. 'The Bravest Man In The Universe' is his first album for 18 years. It was recorded and co-produced by Damon Albarn, which came about when he did guest vocals for The Gorillaz's 'Plastic Beach' album, and XL label boss Richard Russell who was behind the controls on Gil Scott Heron's final album 'I'm New Here'.