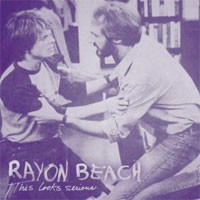 The swirling cloud of deranged noise emanating from the highly radioactive inner core of RAYON BEACH has once again reared its head up, bucking wildly and shattering the iridescent thunder of the heavens into shards of wonderfully damaged sound. After the inescapable fallout from their debut Memory Teeth 12-inch EP in 2010, they have rightfully emerged with their first proper full-length LP, dragging the trembling scraps of electronic punk slime through a kaleidoscopic garbage can and out into the light, where they can cook properly in the blinding Texas sun. But whereas on their first record the band was still carving out their slithering sound, melting from one mellifluous life form into another over the course of those first six treacherous tracks, here they’ve found their footing on their first LP, clenching a roughly pristine throb and riding it out into a sizzling pinnacle of modern punk precision.