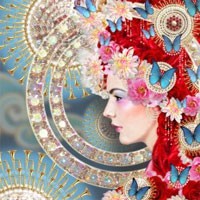 Record Label
Gift Of The Gab

With a list of accolades as long as a pair of stripy tights, Gabby Young And Other Animals, (otherwise known as the “World’s Finest Purveyors of Circus Swing” – Clive Anderson, Loose Ends on Radio 4) release their new highly anticipated album. Written by Gabby and Stephen Ellis, who also produces, this 13 track work represents a giant sonic step forward. Its colourful avant-garde sound, with lush orchestration, horns and quiet melodies, exudes the best bits of music hall, burlesque, 1920s flapper music, Nouvelle Vague cinema and torch songs. Indeed, Gabby comes across like Rufus Wainwright’s other younger sister – bred perhaps on a diet of Bjork, Imogen Heap, and Joanna Newsom – as she sets out winningly to reinvent her own genre, Circus Swing.

‘My sound’s matured,’ is all she’ll say. ‘I’ll admit that. I’ve honed my craft. I’m very happy and settled where I wasn’t before. ‘ Lead single ‘In Your Head’ allows fans to connect with the party tempo of the first album. Its witty animated interactive promo, in which you can ‘choose’ which animal to be saved from an evil ringmaster, was produced by Gabby’s friend Georgina Hurcombe (Lovelove Films). A metaphor for the music industry? ‘Perhaps,’ sighs Gabby, with a smile. The slower tracks stand out particularly: The Answer’s In The Question’s incessant analysis of a relationship; the contemplative trumpet-tinged ‘Honey,’ Gabby’s personal favourite and, most impressively, ‘Male Version Of Me’, a quiet accordion-tinged paean to finding a soulmate. But fear not, there are hoedown moments aplenty too: ‘Horatio’ is one such, and closing track ‘The Band Called Out For More’ sees Gabby morph into some crazed Edith Piaf. ‘Segment’ opens quietly before building into an almighty strings-charged Arcade Fire-style workout, whilst the album’s masterpiece is the serpentine ‘Neither Beginning Nor The End’, a spine-tingling mid-tempo classic, complete with operatic flourishes, before an abrupt finish leaves the listener needing more.

Gabby Young’s twisting roots have carried her and that stunning voice from her native Wiltshire to land with a bang at the centre of London’s music scene. The youngest ever recruit to the National Youth Choir at the age of 12, Gabby was on track to become an opera singer until Jeff Buckley and the jazz greats inspired her to switch teams. In 2008 Gabby formed the 8-piece band who complete the magical musical fairground we know today, using a wide range of instruments, most notably trumpet, trombone, piano and clarinet – affectionately dubbed Circus Swing by those who realised there was no existing genre to encompass Young’s sound. It was crowd-funding her first album that really put her on the map. The Evening Standard ran a story on it, and the piece was picked up across the board – with an interview even on Sky News, and positive write-ups by many of the UK's major newspapers, including The Guardian, The Sunday Times and the London Evening Standard.