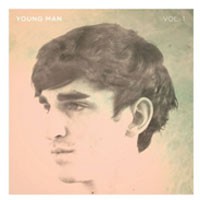 Before he was even finished with the debut Young Man EP Boy, singersongwriter Colin Caulfield already knew what he wanted to do with this one, the 9-track album Vol. 1. First conceived in Caulfield’s college dorm room in 2009, Young Man is a concept project about youth -- about how that fleeting phase when you're emerging into adulthood can feel like reliving two decades of highs and lows in just a couple years. "I wanted all the things to come out in succession," Caulfield says, "because the series documents what happened to me when I was writing them. The whole project more or less portrays the trajectory of a young musician, first starting out, making mistakes, then growing up.

He's growing in leaps and bounds, turning out a more muscular, focused sound on 'Vol.1,' where songs such as "21" and "Fate" bend the dreamy atmospherics Caulfield has been exploring since his first EP into lean, pliable melodies. Vol. 1 is the first Young Man effort to feature a full band. He is supported here by guitarist Emmett Conway, bassist Joe Bailey, drummer Dylan Andrews and synth player Jeff Graupner, most of whom have been playing live with Caulfield for the past couple years on tours with Cold War Kids, Givers, Grouplove and Fanfarlo, among others. "I always envisioned this as a full band project," Caulfield says. "Experimenting with a group of musicians in a way that you can't when you’re alone is much more appealing for me, but I had to teach myself how to record the songs on my own first."

Vol 1 is also Caulfield's first project to be recorded in a studio -- Chicago's Soma Studios, where Young Man spent several weeks last year with producer John McEntire, known for his influential work with Nineties indie rock heavyweights Tortoise and The Sea And Cake, as well as production/engineering credits for Broken Social Scene and Stereolab. "I had a very good idea of what each song should sound like in my head before we went to the studio," Caulfield says. "They came out sounding different than I thought they were going to, but a lot of the album is about being happy with that. We almost called the album Damon & Division, which are the cross streets where Soma is, because the studio itself was such an important instrument on this record."

Beyond any one instrument, Caulfield says the biggest influence on Vol. 1 was his longtime attraction to progressive rock. "It’s such geeky music," he says. "But the musicianship is something I really get behind. Sometimes I find myself using the same chords and rhythmic concepts, but those influences always push me to do something new as much as I'm able - making music technical in clever ways without letting it get too selfindulgent."

Yet Caulfield also notes that the real writing of this record coincided with his beginning to develop a real taste for pop music again, for the first time since his early teens. "I got more interested in songwriting, and I learned to embrace pop music like Kelly Rowland and Nick Drake. I resented that music for so long, for some reason. I don’t think it’s negative anymore to write a good hook and have it repeat. For the longest time I wanted to make music that had parts that moved in and out, that didn’t follow standard pop conventions. I guess I finally realized it’s cool to do both." Prog pop? Yes. Finally.