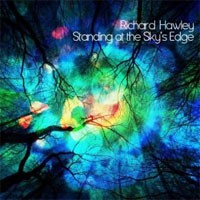 Recorded at Sheffield’s Yellow Arch Studio in 2011, ‘Standing At The Sky’s Edge’ marks a seismic shift in direction for Hawley. The album is a euphoric, sonic assault on the senses, channelling elements of psychedelia, space rock and ragas with heavy riffs and raw, visceral guitar solos – as well as more familiar, tender moments – which will surprise Hawley’s fans and peers alike.

Exploring lyrical themes of love, loss, redemption and darker areas of the human condition, it’s an album of ominous storytelling and cosmic exploration, sung in Hawley’s rich baritone and soundtracked by an epic musical journey in glorious, menacing Technicolor. In the tradition of Hawley’s previous albums, the title is inspired by an area of Sheffield.

Hawley says of the album, “I wanted to get away from the orchestration of my previous records and make a live album with two guitars, bass, drums and rocket noises!”

'Standing At The Sky's Edge' is set to establish Hawley as one of the UK's greatest, contemporary guitarists.

Laura says: Right from the off you realise that this album isn’t exactly going to follow the same lush, string embellished path of the last three Hawley albums, as it plunges straight into a seven minute plus psych rocker. "She Brings The Sunlight" and title track "Standing At The Sky’s Edge" - a bleak view of modern life pushing people to the brink - pretty much set the tone for the whole album really. Although he hinted at a darker side with "Truelove’s Gutter", this album is not just a darker affair, but heavier too. (He has rocked before though don’t forget, and he’s really pretty good at it!) There are lighter moments: "Seek It" and the shimmering acid haze of "Don’t Stare At The Sun" for example, mellow things out nicely before we’re plunged back into heavy riffs and layers of feedback. It’s an ambitious and very different sound, but he pulls it off with ease. And of course with THAT voice, it’s most definitely a Richard Hawley album. A triumph!