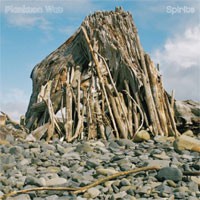 Plankton Wat is the solo sound world of Dewey Mahood, known for his work in Eternal Tapestry, Gärden Söund (with Barn Owl), Edibles, Bloodbiker, and Jackie-O Motherf*cker. Beginning as a home recording project in 2001, Mahood has slowly built a collection of highly personal music that has filtered out into the underground via tape labels such as Stunned, Digitalis, and Sloow. 2009 saw the release of Dawn of the Golden Eternity, a full length LP on DNT which brought together many of Mahood's influences - kosmische drones, spiritual improvisation, burnt out psych, and sun baked folk.

Raised in rural Northern California, and calling Portland, OR home since the early 90s, Mahood has spent his life dedicated to the outsider fringe of experimental music. Early bands like Ungutta, and Kino-Eye explored DIY punk and free improv, while Elephant Factory (with Larry Crane of Tape-Op magazine fame) took on avant guitar rock in the tradition of Mission of Burma. Mahood's music has gradually moved into the dark realm of psychedelia first traced in early 2000's bands The Cosmos Group, and Scuffle & Dustcough, both of which borrowed from late 60's San Francisco acid rock. Upon meeting Nick Bindeman and forming Eternal Tapestry in 2005 there has been no looking back. In recent years Mahood has also worked with Barn Owl in the project Gärden Söund, drenched his music in dub with Edibles, blasted hardcore punk with Bloodbiker, and laid down the bass groove with Jackie-O Motherfucker.

Spirits, the Plankton Wat debut for Thrill Jockey, takes these diverse experiences and creates a record of soaring exploration and raw beauty. The album is intended as a meditation on the Pacific Northwest environment - the dramatic landscape of the Cascades, high desert, rugged coastline, and ever changing sky. Recorded throughout 2011 on 4-track cassette in Mahood's basement, Spirits traces a year of changing seasons, feelings, and emotions. Inspired by the "universal music" of Don Cherry and Alice Coltrane, the album uses a variety of instruments including electric and acoustic guitar, bass, hand drums (played by Dusty Dybvig (Edibles, Horse Feathers) on the title track), synthesizer, harmonium, banjo, cymbals, drum machine, and voice in a layered approach reminiscent of Sandy Bull and Brian Eno. Both a celebration of the magical possibilities of life, and a contemplative look into the darkness, Spirits creates a warm blanket of sound perfect for watching the sunset from a high coastal sand dune. Exotic and esoteric as the ancient city of Angkor Wat which Plankton Wat takes its name, this is future primitive music for mental escapism.