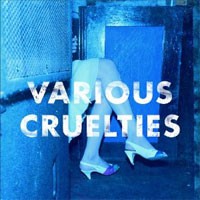 Various Cruelties had an amazing year in 2011, one that will only be eclipsed by whats to come in 2012. Fronted by Leeds Local Liam O'Donnel, Various Cruelties proudly display their fondness of Northern Soul blended with their unmatched ability to write a pop hook.

Having released their debut single 'Chemicals' in the summer the band were immediately asked to perform on Later with Jools Holland which aired in the Autumn. Follow up single 'Great Unknown' continued to grow Various Cruelties popularity earning them an addition on the R1 playlist and support slots with Noah and the Whale and Kasabian.