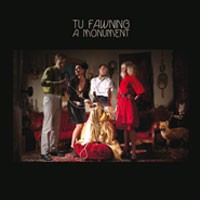 Portland’s Tu Fawning return this May with their sophomore release titled 'A Monument'. A mere nine songs short, but enough time to confirm the suspicion raised by the band's debut album 'Hearts On Hold: Can it be that this band sets itself apart from everything else out there right now? Yes, this is proof.

A Monument is in fact a very different record, all the more reason for us to appreciate this band and their artistic merits. Live Tu Fawning deliver a dense, romantic, highly energetic live show, much more powerful than their debut album would have led you to imagine. And on A Monument this sparkles through on every track.

A Monument offers exactly nine very different pieces to that beautiful and unusual Tu Fawning style. Tracks like 'Blood Stains' have moved Tu Fawning south, more the Down Under type of south, with the warped R’n’B styles of a Birthday Party or early Bad Seeds. Less the atonality and surely sans the testosterone. And likewise 'Wager' lifts some moment of orchestral nausea out of a Crime And The City Solution track, converting it into a real song. Not all gothic, but certainly all dark. Weird, eccentric, timeless are user-friendly adjectives for the simple minded when trying to describe a band such as this. And lets not forget dramatic! Does it get anymore dramatic than 'Build A Great Cliff'? Take a rollercoaster ride with the epic seven and a half minute album closer that is 'Bones'. The latter showing that there is indeed also a sense of playfulness here.

Above and beyond the usual guitar, bass, keys, drums, the record feautures instrumentation such as a ragini, a tuned down marching band drum, old 80’s synths, actually lots of synths, those samples of South American chants turned into chords. Not to mention the degenerated Four Track recorders, dying guitar pedals, but most importantly: "turning your back to the microphone and yelling...“. Monumental indeed!