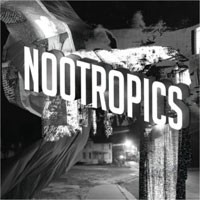 The band released their beguiling debut album ‘Twin-Hand Movement’ in July 2010. ‘Nootropics’ is the next step, with its sleek, metronomic pulse and vast meticulous vision.

“Lower Dens make music that seems to seep in through your pores. Music to be immersed in” - Clash

“Slow burn charms from a brainy band” - The Independent

“Lower Dens know when to hold back and when to push forward, how to manipulate the dynamics of a rhythm for maximum effect” - Drowned in Sound