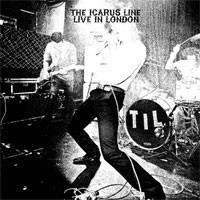 THIS IS A RECORD STORE DAY EXCLUSIVE, LIMITED TO ONE PER PERSON.


The Icarus Line, a proper rock and roll gang, led by the fearsome Joe Cardamone, toured the UK in October 2011 in support of their Wildlife album. With stand in drummer Sammy as their drummer quit just before boarding the plane!! they slammed it, this was feral rock and roll grime, even original bass player Lance Arnao was back in the fold, someone recorded the London show.. and here it is, pressed on some limited edition vinyl..raw, bleeding, and a good indication of how the Icarus Line are...oh yes.. 100 copies only for the UK.