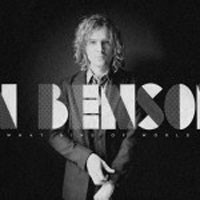 Self-produced and recorded in the analog-only environs of Nashville’s ‘Welcome to 1979’ studios, What Kind Of World features members of Big Star, Ryan Adams' the Cardinals and Phantom Planet.

Co-founder of The Raconteurs, Benson has spent a lifetime spread across four states, from a childhood spent on the outskirts of New Orleans, to his years in Detroit, Michigan, sojourns in Los Angeles and San Francisco, and a more recent relocation to Nashville, Tennessee. With five solo albums, one as Well & Goode and two albums apiece with The Mood Elevator and Raconteurs, he has captured his own America in finely hewn power pop.

Created as an outlet for his own writing and production work, Benson’s Nashville based label Readymade Records & Publishing will follow the release of What Kind Of World with the debut album from Young Hines in May, produced by Benson himself.