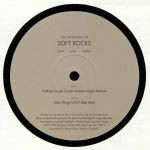 ESP Institute come up with the goods once again here, furnishing all working DJs and disco dancers with a much needed, long awaited repress of this killer Soft Rocks remix wax. Originally released FIVE whole years ago as part of the "Revenge Of The Soft Rocks Remixes" project, this dreamy drop saw New York disco viking Justin Vandervolgen and Lisbon's Tiago bring some of their finest work to the ESP table, dominating setlists and festivals for many months. As ever, Justin has no idea what a 'quickie' might entail, and treats us to another EPIC extension. There are no track times listed, but I reckon his rework goes on 'til Monday morning...Picking up a half finished spliff from the U-Star studios and necking a couple of early nineties garys, JVV leads us off on a percussion odyssey to kick off his killer remix. Brain fizzing fx and space lasers rebound all over the showing, cascading off a prismic discoball and making a little space for the fluid beauty of those jazzy keys. One epic piano breakdown later and we're lost in the lush undergrowth of the "Talking Jungle", freaking out to the walking bassline, squealing synth line and wild space echo abuse. Extra-planetary disco with all the right references to classic house, this was massive at El Diablos, Naive Melody, Disco Futura and anywhere DJ Harvey's played in the last five years! Mega! If you need to chillax after all that dancing, why not try the flipside's insanely serene take on "Obo" by ESP favorite Tiago (Sea Power & Change, Gala Drop, DFA). Swaying, Mediterranean rhythms, snaking bass and the otherworldly sound of the oboe overlap and unfurl within the richly psychedelic soundscape the Portuguese producer creates. It's the musical equivalent of a stroll past the face and fruit dish on Dali's beach. Good lord this is quite a piece of wax!

Patrick says: This Soft Rocks remix disc is nothing short of a modern disco classic! JVV goes wild on his psychedelic disco extension, delivering a dope rework that's been hammered by every decent DJ I can think of over the last few years. On the flip, Tiago takes a serene stroll down the beach, dipping his toe in lysergic waters on the way. Mega!