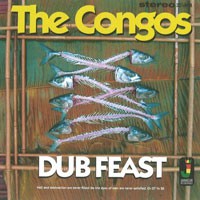 The Congos possess what all bands look for, that unique distinctive sound that draws the listener in. Alongside the great songs, lead singer Cedric Myton’s singing, phasing and falsetto voice makes that just the case. The Congos were formed by Cedric Myton (b. 1947, St Catherine, Jamaica) around the mid-Seventies when the Rasta message was central to the reggae sound coming out of Kingston, Jamaica. But he had started out in the Rocksteady era, when he formed the vocal group ‘Tartans’, taking lead vocal duties alongside Devon Russell, Prince Lincoln Thompson and Lindbergh Lewis.They cut ‘Dance All Night’ (1967) and ‘Coming On Strong’ (1968). The line-Up became The Royal Rasses and from this Cedric moved on to form the Congos on meeting Roydel Johnson, who had previously sang with Ras Michael and the Sons of Negas. Cedric’s Rasta roots were firmly in place when he went to work with producer Lee Perry to cut the seminal album ‘Heart Of The Congos’ at Perry’s just built, Black Ark Studios in 1977. Cedric Myton has carried on the mantle, cutting a set of tunes with the help of his good friend Mr Brent Dowe, who had previously sang lead vocals with the Melodians. This is the dub set to the vocal album released on the Kingston Sounds label called ‘The Congos Feast’. With such strong songs, rhythms and vocals it always had the chemistry for a great dub set. Hope you agree and enjoy the dub excursion…

Philippa says: The dub set to the vocal album 'The Congos Feast'.