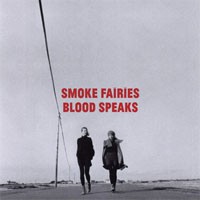 Since their 2010 debut album – “Through Low Light And Trees” - Smoke Fairies’ Jessica Davies and Katherine Blamire have been on an epic journey, both physically and spiritually. Touring Britain, Europe and America; in tour buses, ramshackle vans and even driving themselves 3000 miles across the US, drawing increasingly devoted audiences with their exquisitely original and mesmerising music.

All these experiences bleed from every pore of their brilliant new album, “Blood Speaks”. From the heavyweight humidity of “The Three Of Us” and “Feel It Coming Near”, to the fragile haunts of “Daylight” and “Hideaway” and the sonic adventures of “Film Reel” and the title track, Blood Speaks is undeniable proof of a tougher and more fearless Smoke Fairies. “We’ve got more confident in what we’re doing, and so we’ve pushed things a bit more,” says Katherine. “We’ve gotten bolder with the dynamics, and our influences have broadened.”

Suddenly that debut album feels somewhat shy and innocent by comparison, though at the time Through Low Light And Trees certainly cast a powerful shadow, with spectral melodies driven by an uncanny symmetry of sound that reflected the duo’s long friendship. Friends since school in Chichester, Sussex, bonding over their parents’ guitars and Jessica’s mum’s vinyl collection, the pair subsequently lived and worked in New Orleans and Vancouver, met and recorded with Jack White for his Third Man label in Nashville and recorded their debut in a remote Cornish studio - all of which added and embellished their haunting, deep-reaching musical impact.

Head, the venerated producer, returns for Blood Speaks, and their live band was also drafted in, adding their intuitive version of the duo’s evolving sound. This time round, the album was produced in the urban surroundings of West London’s Ladbroke Grove. “Before,” Katherine recalls, “the city felt like a trap to us. Like on the first album, we wrote “Devil In My Mind”, about feeling crushed by London. But as the title track symbolises, we’ve made peace with the city. Maybe travelling gives you the space to counteract a city’s impression, but a lot of Blood Speaks is inspired by London and by travelling.”

‘Blood Speaks’ itself is also the album’s longest and most clear signpost of progress. “We tried to break out of the different forms which you can get restricted by in folk and blues,” says Katherine. “It was very liberating to do that, as well as a very uplifting, independent song for us.”

Jessica: “It’s about the sense you get from stopping, thinking and just focusing on your surroundings. To listen to what your blood is telling you, to experience life and to celebrate the freedom of being able to move around.”

The brooding “Version Of The Future” is one distinct ‘city’ song, while ‘Awake’ is haunted by the idea of millions, “thinking the same thoughts at night, troubled by the same routines, dreaming together, but alone,” says Katherine. “We got that feeling too when we drove across America, of being together, but feeling very alone. We did end up in some very strange places. Driving 200 miles to find a motel, bikers either side of our room, and suddenly realising we didn’t know where we were, and neither did anyone else!”

After that cross-country tour and another to play shows with Blitzen Trapper and Dawes, numerous ‘travelling’ songs appeared. Such as “Take Me Down When You Go”, with its unforgettable images (“black ice on a freezing drive…wrote your name on the steamed-up glass / I feel dead like a winter grass”) and “Daylight (“at night, in the motel, I dream of the car crashing through the wild pastures”). The album’s lead single “The Three Of Us” (which spearheads an EP alongside “The Wireless”, “Radio Clicks On” and “The Bells”) was originally conceived a decade ago during a Greyhound bus trip across America the pair took with a friend, it was revisiting some of the obscure towns while driving between shows got Jessica thinking about, “life, friendship, where it ends and appreciating the journey as you go. Your life stretches out and you see so many different lives and places. What’s to stop you from getting out the bus or car and settling in, say, Montana?”

But Smoke Fairies won’t be settling down yet. This epic journey still has a long way to run. As Katherine concludes, “something about what we’re doing drives you on. Something you can’t escape from. It’s part of our journey and we haven’t got where we’re going yet.”

Philippa says: A name like Smoke Fairies suggests a will-o’-the-wisp fragility, and while Jessica Davies and Katherine Blamire’s vintage floral frocks and laced up boots see them conform to certain expectations of folky femininity, names and looks can be deceiving. Much of the two years since the pair’s full length debut "Through Low Light And Trees" has been spent touring, criss-crossing 3000 miles of America as well as Europe and the UK. While many might be cowed by that expanse of the Midwest USA, with Smoke Fairies it seems to have given them a greater presence and a new found confidence, which in turn has transmitted itself to their music. It’s a subtle shift, and one that I only fully appreciated listening to "Through Low Light And Trees" and "Blood Speaks" back to back.

As with its predecessor, "Blood Speaks" is steeped in the history of English folk, Americana and blues (the pair have previously decamped to New Orleans for a year’s study), but this new album has a certain additional muscularity to it, most notable on the opening blues slide guitar on "The Three Of Us", while title track "Blood Speaks" goes beyond the constraints of the folk / blues tradition altogether. Unchanging, however, is Smoke Fairies USP, the entwined, entrancing ethereal vocal harmonies of Blamire and Davies, which are still at the heart of every song, as are the tales of love and loss, continuing the thread of melancholia that runs through all their work. If, like me, you found "Through Low Light And Trees" totally enthralling, "Blood Speaks" will be sure to captivate you just as much.