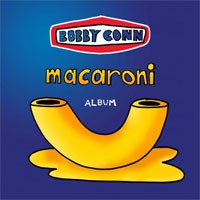 Musician, misfit, culture warrior and bullshitter: Robert "Bobby" Conn. Recorded with his new band The Burglars, this album is the first since 2007’s King for a Day, and his first new release on Fire Records. Bobby has equally delighted and annoyed hipsters since first appearing on the Chicago music scene in the mid '90s. Blending aggressive showmanship with an omnivorous love of musical genres, from Suicide to Streisand or from The Sweet to Stravinsky, Bobby has often irritated and provoked audiences, but never bored them. Bobby Conn's lyrics document the continuing absurdities of contemporary Western culture, illustrating and celebrating the convenient hypocrisies that allow us to sleep soundly every night.

He developed "The Continuous Ca$h Flow System" in 1995 as a critic of the magical thinking that Americans employ concerning their debt fuelled lifestyles. 15 years later, Bobby's "Continuous Ca$h Flow" is revealed as the operating principle of the entire financial system. He has accurately described the Armageddon based world view of America's Christian right since 1996, and tracked its evolution from fringe fanaticism to its current place in the heart of America's political mainstream.

But despite the relevance and prescience of his songwriting, his devotion to total entertainment in glitter and heels has confused as many as he has enlightened. He continues to collaborate with his wife and musical partner, Monica Boubou. Fully his equal as an entertainer herself (and more than his equal in stature), her electrified violin defines the epic melodic reach of their music. In between bouts of touring, Bobby and his band, The Burglars, headed to the studio to create this collection of new tunes, titled "Macaroni". Macaroni is Bobby Conn’s first album in 5 years (and first for Fire Records) will be released on CD/LP in March - followed swiftly by a re-issue of his landmark debut "Bobby Conn".

Macaroni is a contrast between "this is what you want" (the packaged predictable blandness of a Macaroni dinner) but this what you get (the violent mess of reality). Macaroni will be supported by a 7" Single "More Than You Need" backed with a cover version of the Walker Brothers "Fat Mama Kick.