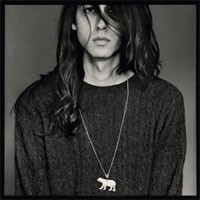 The wonderful thing about the music Adam Bainbridge makes as Kindness is how little it tells you about its origins. It bears the fingerprints of no specific scene, no particular country, no certain era. Taking in the leftfield New York disco-dub testaments of Walter Gibbons and Larry Levan, the cosmopolitan art-house funk rhythms of Grace Jones and the Tom Tom Club and the frictionless R&B of Alexander O’Neal are all swirled around with the blurry Polaroid pop of Ariel Pink and Phoenix.

The album opens with massive single track "SEOD", which feeds an 80s pop vibe through deeper-than-deep electronic house - emotive, melancholic, cosmic, anthemic. "Swingin' Party" keeps the groove going, letting Bainbridge's vocals soar over a simple 4/4 groove. Next we head off at a tangent for a cover of the Eastenders theme "Anyone Can Fall In Love" in slo-mo synthwave boogie style. "Gee Wiz" mixes jazz-funk guitar licks with submerged ambience, while soon-to-come single "Gee Up" nails the funky electro-pop sound of Phoenix right on the head. "House" delivers beatdown house rhythms and the kind of chorus Scritti Politti would've been proud of back in the day. Go-go and Jam & Lewis style electro-boogie infuse the sampladelic "That's Alright", which will take you back to 1985. "Cyan" still sounds more Arthur Russell than Arthur Russell, in a beautiful Balearic-disco style. But hey, why not take a side-turn into finger-snapping jazz, while listing some musical heroes... "Bombastic" does just that. To close "Doigsong" slaps the bass and leads us to the dancefloor with killer boogie-pop sounds.

"A must for fans of Phoenix and DFA Records" - Sian Rowe in Q.

Philippa says: Kindness throws his net in a wide arc when it comes to inspirations for his debut album: Phoenix style soft-pop, 80s electro-boogie, Arthur Russell-tinted Balearic, beatdown house, synth-pop... It's all here on this stunning long player.