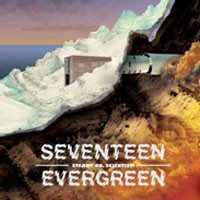 “Uplifting future-pop anthems that sound like a mixture of first-album MGMT and Little Dragon” The Guardian.

Five years after the release of their debut LP, Life Embarrasses Me On Planet Earth, San Francisco’s Seventeen Evergreen make an exciting return with sophomore long player, Steady On, Scientist!, via Lucky Number.

Sonic references are broad, explosive and reformulated. Late 80s/early 90s dance era pulsing pop-beats rise, hot with hope, fuelled by unique bass-lines, played like classic 60s Fender riffs, but with added synth propulsion, whilst lyrical and musical themes are always stretching beyond norms. Lyrics are immediately provoking and mind grabbing and across the album, vocals are textured like instruments in their own right.

This album is about space and density – the polarity and the duplicity of life. Names like New Order, Air, Screamadelica-era Primal Scream, Sonic Youth or Flaming Lips may come to mind, but sonically and spiritually, it’s a singularly triumphant and liberating concoction, an anthemic vision. Like their debut, Steady On, Scientist! is entirely self-written, recorded and produced and, once again, it emphasizes its creators clear and unique identity, away from the pack.