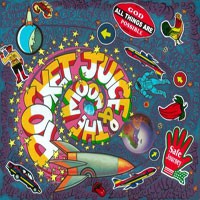 High up in the skies, amongst the clouds, Rocket Juice & The Moon was born. Literally. It happened back in 2008, when Damon Albarn, Flea and Tony Allen convened on the same Lagos flight, to play and exchange musical ideas in that city as part of the Africa Express collective. Relishing a shared enthusiasm for one another’s work, and bonding immediately, there and then the triumvirate laid down the blueprint for Rocket Juice.

Still, more than a year passed before conditions were set for three weeks together at Albarn’s West London studio, recording and refining two-dozen startlingly out and deeply funky instrumental grooves. The next stage was to invite onboard some extremely talented friends, with further sessions in Dallas, New York, Chicago and Paris… Erykah Badu, no less, queen of contemporary soul. Three companions from Africa Express: Malian singer Fatoumata Diawara, whose debut album has topped World Music charts since its release last Autumn; her multi-talented compatriot Cheick Tidiane Seck, whose prodigious keyboardism has lit up releases by artists ranging from Youssou N’Dour to Hank Jones; the young, Ghanaian rapper M.anifest, quizzically existential, switching seamlessly between Twi and English. And the Hypnotic Brass Ensemble, long-time stalwarts in the Honest Jon’s set-up. Finally, the tracks were dispatched for mixing to Berlin, to be meticulously honed, polished and envenomed by Mark Ernestus, one half of the legendary Basic Channel and Rhythm & Sound partnerships.