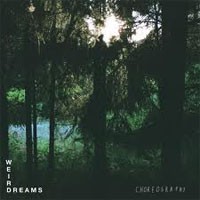 Following feverish response for their two EPs and recent single ‘Holding Nails’, East London’s psych-pop four-piece Weird Dreams are set to release their brilliant debut album, Choreography, on Tough Love. Influenced by both the Beach Boys and the films of David Lynch, Weird Dreams draw equally on the intricate harmonies of the former and the latter’s penchant for twisted suburban ennui.

“The way David Lynch pushes reality to a point where it feels uncomfortable, his obsession with 1950s culture, his stream of consciousness approach to working”, says frontman Doran Edwards. “Weird Dreams is a bittersweet pop band with twists.” On record, it translates to the highly melodic, self-produced Choreography, an album on which every track has the right to be considered single-worthy. Written in Doran’s studio flat overlooking the train tracks, the tunes may be sweet but the words often have a sting in their tail. “I love how idealistic and overly gushy ’50s doo wop and ’60s girl groups were, but I wanted to produce an even more dreamy-sounding version with lyrics that could be quite dark and resentful,” says Doran.

True to that vision, tracks such as “Little Girl” and “Hurt So Bad” speak of unusual relationships, while album centerpiece “Suburban Coated Creatures” is a personal unraveling of difficult teenage years dealing with small town life. Initially built around the nucleus of Doran (guitar and vocals), Craig Bowers (drums), Weird Dreams formed when Doran and Craig met working in a vintage clothes shop, where talk frequently turned to ’50s pop, ’60s girl groups and – naturally – David Lynch movies. Releasing a joyous, cassette-only debut EP on an imprint of Craig’s aptly named Sleep All Day label, they recruited Hugo (bass), then adding James (guitar) for live duties and in time for second EP Hypnagogic Lullaby, a notably darker, harder-edged affair. And it’s with their debut album that these early forays have coalesced into a coherent, immersive whole.

The band’s name – and much of its outlook – is taken from Doran’s propensity for real-life weird dreams. “Since I can remember I've always had incredibly vivid dreams, both good and bad,” says the frontman. “They've always felt like an important part of my life.”