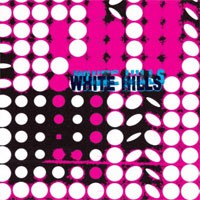 White Hills newest and most energized recording to date is bursting with raw energy packed into their most concise songs to date. Fear not long time White Hills fans, there is still loads of killer guitar work and fuzzed out psychedelia on 'Frying on this Rock. The album opens with an under five minute scorcher and closes with a 15 minute track that reminds us why space rock gatekeepers like Julian Cope were very early supporters. The end result, Frying on this Rock, is an invigorating deep space rock album. An album that is at once able to channel the energy born of a collective anger into a swirling psychedelic, brutalizing musical statement that mainlines the thrill of defiance straight to the listener’s heart.

“...White Hills have established themselves as some of America’s foremost proponents of fuzz-driven space rock... Its latest effort H-p1 expands upon the the legacies of Hawkwind, Can, and early Tangerine Dream with synapse-frying deepspace epics” - SF Weekly; “A darkly hypnotic mix of churning guitar, distant vocals and swirling synth drones, this record conjures a riff-heavy psychedelic vibe that picks up where the Velvet Underground and Spacemen 3 left off. Far out.” - Los Angeles Times.