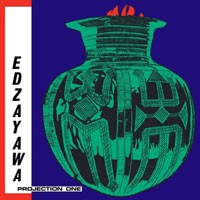 This extraordinary, dark, moody and experimental offering from teenage Ghanaian Afro-rock outfit Edzayawa (pronounced Ed - Zye - Ow - Ahh) is one of the more obscure and unique releases that Soundway have brought back to life over the past ten years. Arriving in Lagos from Togo in the spring of 1973 the band were taken under the wing of Fela Kuti. After a run of appearances on the bill at his Shrine club they were signed by EMI Nigeria’s visionary in-house producer Odion Iruoje. Over two days in May 1973 they recorded "Projection One", which was their one and only release before disbanding two years later.

The majority of their songs were based around a 6/8 rhythm influenced by the music of the Ewe people from the South East of Ghana and Western Togo. With themes that draw heavily on traditional folklore and deep philosophy the album has a heavy feel that sets itself well apart from the much of the lighter happier highlife of the previous decade. Alongside Fela’s first few albums, Blo’s "Chapter One" and Mono Mono’s "Give The Beggar A Chance" this was one of the very earliest Afro-rock LPs released in West Africa and has remained out of print for nearly forty years. "Projection One" never got a release in the band’s home country of Ghana and apparently sailed way over most peoples heads at the time. Very much like the debut Hedzoleh Soundz album that Soundway re-issued in 2010 (another Ghanaian band that were recorded in Lagos, produced by Iruoje on the recommendation of Fela Kuti) the only copies that made it back to Ghana were the few that the band took back themselves.

Soundway will release "Projection One" here in it’s full original format on gatefold vinyl as well as on CD for the first time: remastered and accompanied by liner notes that contain the reminiscences of band leader Nana Danso (who subsequently founded and now runs the Accra-based Pan African Orchestra).

MonoMonoGive The Beggar A Chance

Joni HaastrupWake Up Your Mind