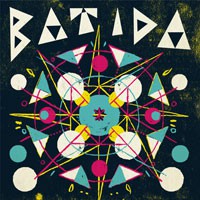 Being the first of a string of brand new projects, this eponymous first album sees Soundway taking a slightly different direction in 2012 and beyond. Championed mostly for their work in un-earthing and re-releasing classic, rare and vintage tropical recordings, Soundway have started signing new acts that have drawn on and been inspired by the kind of music found on the label’s groundbreaking compilations and re-issues. What originally started out as a radio show designed to promote new African music has slowly evolved into a collaborative project crossing continents.

Here the label releases the debut album from Batida, the brainchild of Angolan / Portuguese DJ Mpula aka Pedro Coquenão. A distinctly modern and vibrant project with its feet firmly rooted in the past, Batida combine samples from old 1970s Angolan tracks with modern electronic dance music. Music is the starting point but through dance, graphics, photography, radio and video, Batida expands, taking in politics and social commentary but always bringing it back to the party.

Whereas nearly all of kuduro (Angolan electronic music) has no obvious references to its country’s musical heritage, it is deeply engrained in Batida’s music. Sampling tracks from 1970s Angola, Batida is a reinterpretation of Angola’s musical past, bringing it firmly into the modern day. Batida’s high energy live show features dancers, live samples, percussionists, MCs alongside visuals and images (both archive and new) of Angolan streets, war and fragments of tribal life.