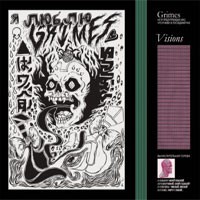 For those unaware, Grimes is the inventive work of Claire Boucher, a project that has gained notoriety since its inception back in early 2010. Moving to Montreal from Vancouver in 2006, she developed Grimes among the city’s burgeoning DIY scene; a scene where both punk ethos and pop music collide, resulting in a distinct sense of community, religiosity and psychedelic revelry.

‘Visions’ will be her fourth release in less than two years. With her creative bent being both musical and visual, her second self embodies the arts of 2D, performance, dance, video and sound, weaving them all together to strong rhythmic effect. Subsequent records have sharpened her production skills and each one has tackled different influences and styles. This new set incorporates influences as wide as Enya, TLC and Aphex Twin, whilst drawing from genres like new jack swing, IDM, new age, K-pop, industrial and glitch, resulting in a record that is both otherworldly and futuristic.

Claire describes her work as “the only means through which I can be fully expressive. It is both an ethereal escape from, and a violent embrace of, my experience. The creative process is a quest for the ultimate sensual, mystical and cathartic experience and the vehicle for my psychic purging. ‘Visions’ was conceived in a period of self-imposed cloistering during which time I did not see daylight.”