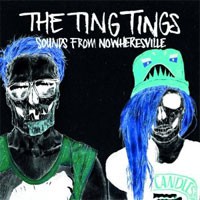 The Ting Tings trademark which inspired the album title for bandmates Katie White and Jules De Martino is simple; to make tracks that sound different to the one before; to have musical freedom and to be held by no boundaries.

‘Sounds From Nowheresville’ didn’t come quickly to Katie and Jules. After achieving worldwide success with their debut album ‘We Started Nothing’ the duo spent a relentless two years touring before eventually returning to the studio. Following a brief spell in Berlin where they recorded and subsequently ditched a whole batch of songs they weren’t happy with; The Ting Tings packed their bags and landed in Southern Spain where they threw out the rule books and made music that made them happy.

Jules said: “Everything before then had been a struggle. Suddenly it wasn’t. Everytime Katie went up to the booth she was nailing it. The lyrics were happening. The whole weight of our shoulders was lifted. This was enjoyable again. It was being dictated by its own energy again.”