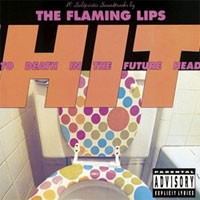 1992's 'Hit To Death In The Future Head' is The Flaming Lips' fifth full-length and first for Warner Bros. Bridging the gap between the band's noisier indie fare and the atmospheric cosmic pop explored on subsequent releases, the 10-song set is masterfully indulgent in both camps while standing on its own as an imaginative and unique work worth its weight in The Flaming Lips ever evolving catalogue. While awaiting a nearly year long release delay for clearance to use a sample from Michael Kamen's score for the film Brazil on the track "You Have to Be Joking (Autopsy of the Devil's Brain)," the band underwent further transition as Nathan Roberts and Jonathan Donahue left the band and were replaced by Steven Drozd and Ronald Jones.

1. Talkin' 'Bout The Smiling Deathporn Immortality Blues (Everyone Wants To Live Forever)
2. Hit Me Like You Did The First Time
3. The Sun
4. Felt Good To Burn
5. Gingerale Afternoon (The Astrology Of A Saturday)
6. Halloween On The Barbary Coaste
7. The Magician Vs. The Headache
8. You Have To Be Joking (Autopsy Of The Devil's Brain)
9. Frogs
10. Hold Your Head