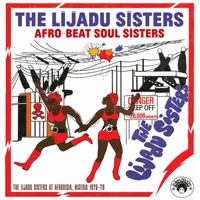 The Lijadu Sisters released a series of albums in the 1970s in Nigeria that blended heavyweight Afro-beat with psychedelic Afro-rock, high-life, disco and soul in a truly unique combination. These albums are impossibly rare to find and this collection brings together the best of those recordings.

The Lijadu Sisters were the most successful female group in Nigeria in the 1970s and managed to overturn many stereotypes and attitudes as they carved out a unique space for themselves in a predominantly male arena. Their influences ranged from female soul singers such as Aretha Franklin, The Pointer Sisters and Miriam Makeba to the Afro-beat of Fela Anikulapo Kuti as well as the juju music of IK Dairo and the highlife of Victor Olaiya.

The Lijadu Sisters - identical twins Taiwo and Kehinde Lijadu - grew up in Ibadan, Nigeria. They recorded their debut album for Decca Records in 1969. At the start of the 1970s the two singers joined ex-Cream drummer Ginger Baker’s short-lived all-African group Salt (which also included future members of the Afro-Rock group Blo). This album brings together the best of their tracks from the four albums recorded for the Afrodisia label in Nigeria - ‘Danger’ (1976), ‘Mother Africa’ (1977), ‘Sunshine’ (1978) and ‘Horizon Unlimited’ (1979).