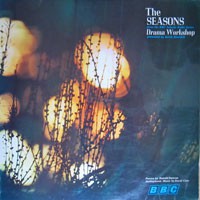 At long last the rarest and most peculiar of all Radiophonic Workshop albums is available. Originally issued in 1969, "The Seasons" has become almost mythical over the last few years. With its mix of unexpected electronics, percussion, tape manipulation and austere poetry, it sounds like no other. "The Seasons" has also become a major influence on bands such as Broadcast and a key reference in the development of Ghost Box and the whole “Hauntology” soundscape. It is seen and heard very much now as an important and lost classic. And after over one year of detective work and rights investigation(which is a lot in this modern world of instant communication), this impressive, strange and wholly unique album is seeing the light of day once again.

Originally made as part of the BBC’s Drama Workshop broadcasts, this album was meant for educational purposes. Coming in the later period of what is commonly known and remembered as “Music and Movement” or “Movement and Mime Classes”, the album was issued briefly as a teaching aid for the modern thinking 1960s classroom. The idea was to play the album and get the school children to dance, improvise, think and create to the sounds and words. The music was originated by one of the early pioneering Radiophonic musicians, David Cain. Very little of his music has ever been made available (except on the classic BBC “pink” album) but to some followers of early British electronics he is the forgotten master.

And for this release he has been interviewed by Julian House (The Focus Group) with a fascinating Q & A, which will appear in the new sleevenotes. As for Ronald Duncan, he is now deceased, but had an interesting and inspired life. A born pacifist, he famously wrote the libretto for Britten’s opera The Rape Of Lucretia, wrote the script for Girl On A Motorcycle, and started the English Stage Company at the Royal Court Theatre. His poetry was published by Faber And Faber by T S Eliot who became a friend. Duncan’s 16 featured poems were specially written in 1969 just for this project.

The album sold in tiny quantities when it came out and was quickly deleted by the BBC. Even the BBC Archive doesn’t have a copy. In fact the album’s scarcity has only added to its mythical status. A handful of originals started appearing in bargain bins throughout the mid 1990s, and as interest in British electronics and the Radiophonic Workshop started to grow the album’s reputation began to gain a little momentum. The album rarely surfaces, but Jonny Trunk and fellow collector Martin Green found three copies at a village hall fayre back in about 1998, one of which was passed on to Jarvis Cocker. Jarvis has subsequently played a track at the start of each month (“January” in January etc) on his 6 Music radio show over the last year. The album also appeared on the Trunk Recommendations pages back in the Spring of 2003 and as a result requests to hear the album started slowly coming in. By about 2010 these requests became regular, and the album started popping up on wants list, on blogs, even on YouTube. Prices for original copies of the album then started to hit three figures. So, in 2010 Jonny Trunk started looking into a reissue. It has taken one and half years and has been a labour of love for all involved. Sleevenotes include contributions already mentioned, a piece by Jon Brooks (The Advisory Circle), and we have even traced two of the four mysterious slides mentioned on the original sleeve, that could be ordered back in 1969 via the BBC as a further aid to dance and projection.

Philippa says: Ronald Duncan poetry line: 'When the gaunt elms shudder within the groin of grief'. How can you resist!