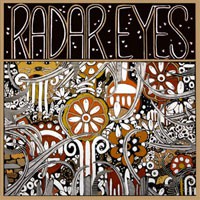 We've been waiting for this moment from Radar Eyes for years. This debut album is more of a pinnacle of modern noise pop than just another invigorating album to get warmed up to on a cold morning. Soaring guitars and heavenly vocal interplay, all screaming along with such interstellar melody and power, you'd think they were on the brink of signing to Creation Records. They have been quietly building an explosive array of hits for the past few years, and now their incredible shine has become unavoidable as they crush together spacey noise with pop hooks so devastating, we just had to ask them to put out their debut album.

Here, finally on the LP format they're best suited for, they've aligned their angelic guitar transcendency to come to full fruition, heralding a fresh new layer of palpitating excitement to their timeless sound they've honed to such a fine point. This is a band that understands how to control themselves under all the constraints, firing off powerfully direct, gigantic synthesized pop anthems that twist and turn with the best of their influences and lock themselves deep inside your head.

Darryl says: Ace indie-jangly 60's fuzz-drenched guitars on the debut album from Radar Eyes. This is exactly the sort of album that Creation Records would of licensed back in the day. Recommended!