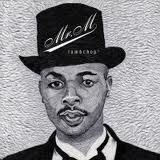 MR. M is Lambchop’s eleventh album on City Slang and documents the band at its best, it encapsulates one of the most profound moments in Lambchop history. Kurt Wagner turned away from music and picked up his brushes to paint his way out of a funk that followed the premature death of friend Vic Chesnutt, who the band backed on 1998’s The Salesman and Bernadette. Incidentally the paintings, thickly layered black and white portraits forming a series called Beautillion Millitaire 2000, feature on the album sleeve and throughout the full artwork-

“As I worked, I was approached by Mark Nevers (former full time band member & producer for the likes of Andrew Bird and Will Oldham) with the idea of making another Lambchop record. He had a concept of a sound and a method that worked with the tone of my writing. His idea was a kind of ‘psycha-Sinatra’ sound, one that involved the arranging of strings and other sounds in a more open and yet complex way. It was a studio creation, not a type of recording based on band performance, and this was a radical approach for us. I felt Lambchop had one more good record in us, and this time I was going to do things as directly and true to my desires as possible.”