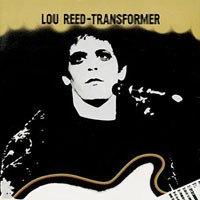 Produced by David Bowie and Mick Ronson, also handling guitar duties on all songs, "Transformer" was Lou Reed's second solo album, but the first containing new songs (his debut consisted reworks of songs he wrote in his Velvet Underground days). "Transformer" is considered Lou Reed's signature album and includes his most known songs as "Satellite of Love", "Vicious"(inspired by Andy Warhol) and "Perfect Day". Rumours has it that, though not credited on the album, "Wagon Wheel" is actually written by David Bowie.